Party with People Who are Happy and Not-Happy Faces

Today during social group Riley created new artwork, was one of her most elaborate drawings, and it's creepy. She told me it's a "party with people who are happy and people with not-happy faces". 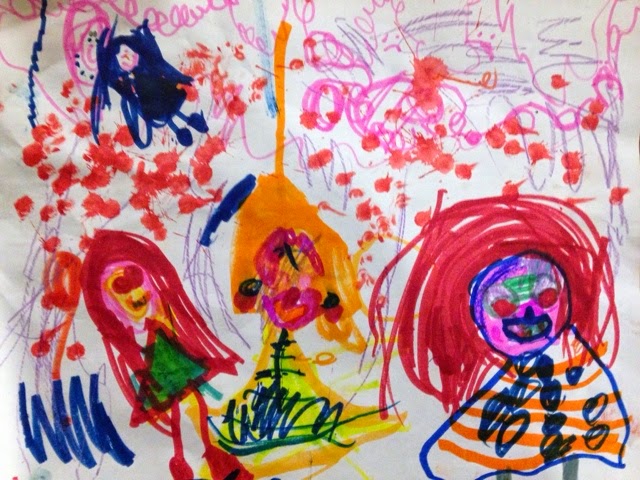 On the bottom right is "Abby" who is having a party. In the middle is a "statue, and it's hanging on a rope, but it's real, it's not just a statue". And to the left is a girl who "almost fall over". And then there are people in the back. Sad faces. Happy faves. The figures were much creepier at first until she started reworking it and coloring more and more. In the end she added what looks like blood splatters across the scene. 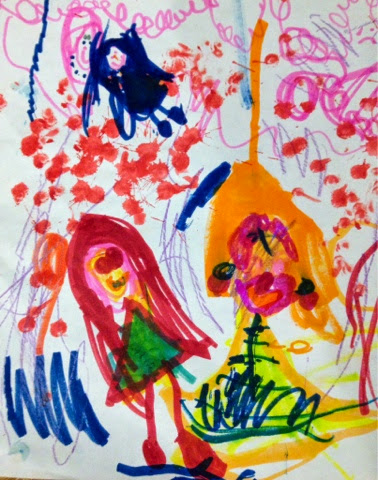 A close up of the statue that's real. (Looks like a clown piñata). Why I'm supporting the Lanterman Coalition, My open letter to the Senate Budget Committee

I’m writing as a parent of a child with a developmental disability to urge you to adopt the budget recommendations of the Lanterman Coalition. The consensus of these 17 diverse organizations is clear in demonstrating that California’s budget decisions have undermined the state’s responsibility to provide sufficient support and services to people with developmental disabilities. Not only have these budget changes eroded the Lanterman Act, they’ve compromised the safety, health and future opportunities for vulnerable Californians and diminished the quality of living for the families represented by these each of these individuals and budget allocations.

As a parent of a child with autism, and as a Regional Center consumer, I can personally attest to the importance of these budget issues. I implore you to please restore funding to the Early Start Program and to encourage families to keep private health insurance coverage by funding insurance co-pays and deductibles for therapies like Applied Behavioral Analysis (ABA).

- Restore Early Start Program funding that was cut in 2009 -

When my daughter was 14 months old, I told her pediatrician I was concerned she couldn’t hear me when I called her name. By 18 months, I reported that I was no longer hearing the few words she had previously uttered. While my daughter’s skills were regressing she was also facing new health challenges. As parents we spent all of our time working to feed her, help her sleep, and keep liquids down, while simultaneously appealing our insurance company for services like speech therapy. With all of the providers we had reached out to for help, no one had ever mentioned available services through Alta Regional or the Early Start Program. We didn’t receive information or a referral until my daughter had already turned three and had nearly stopped talking and eating altogether.

I believe my daughter could have made more progress and received more support if there was more education and outreach on Early Start services. Because children like mine can have regression and show symptoms of serious disabilities at different times, it makes sense to provide early intervention without the new requirements for to have more significant delays across a large number of domains in order to be eligible for services. Many parents I’ve talked to are being told to wait until their child falls behind even further because they have deficits that are just under the current threshold. By cutting these services, and the statewide outreach to make these services accessible, children like my daughter are missing out on a critical window for early intervention. It doesn’t make sense fiscally to compromise services that will have long-term benefit for a child’s outcome and level of functioning and independence.

The budget trailer bill language that has prohibited regional center funding for insurance co-pays and deductibles has been devastating for families like mine. Instead of prioritizing treatment, families like mine are forced to weigh the long-term benefits and risks of keeping our kids covered by our private insurance or by dropping insurance covered in order to afford ABA therapy. California has saved an estimated $200 million per year with the mandated coverage from SB 946, however, the costs of paying for co-pays and deductibles are very small when compared to the entire cost of an ABA program, nearly 20% of regional center families have reported dropping their children from their private insurance plans because of the hardship posed by deductible and co-pays. The state should be encouraging families to retain and utilize private health insurance as a source of support for a child with disabilities. Penalizing Regional Center consumers who carry insurance is not a fiscally responsible policy.

It’s difficult to express just how important ABA therapy has been for my child and our family. It has been an enormous investment in our time and we’ve changed employment, relocated, and altered nearly every aspect of our lives in order to provide her with the services and support needed. ABA therapy has tapped my daughter’s potential and brought joy back into our household. Our child is now able to communicate with us, play safely with her younger sister, and she’s developing self-help skills. I believe that the upfront costs required to promote and provide effective therapy will pay dividends in the long run.

I am counting on your support to make these budget recommendations a reality for the individuals and families, like mine.
Thank you,


Kirsten Yeates
Parent of a child with autism

Senate Budget and Fiscal Review Committee, Subcommittee No. 3 on Health and Human Service

Part A Hearing Agenda on Health including Developmental Services